The amount of camera film people accumulate from voyages, family gatherings, important events, or just plain having fun with photography is huge. Although the era of digital cameras and decent phone capture reduced the extensive use of film for our photographing purposes there is still a very active community of people who employ film-based capture devices. For this exact purpose a simple, inexpensive scanner is very welcome. This article will cover two such scanners, Kodak Scanza vs Wolverine Titan, going over their strengths and weaknesses. In the end, we will provide a suggestion for your purchase. No matter whether you require it for converting a large library of family pictures or are starting to get into the field of photography and need some beginner tools for your hobby these scanners will suffice.

You can view and send these scanners’ pictures on SD card, Mac, Windows through USB and HDMI/TV output. Both models come with a one-year warranty.

The convertible storage section describes which pieces of storage a scanner can convert into usable files through its scan converter. As far as Wolverine Titan goes it can convert 35mm slides, 126 slides, 127 slides, 110 slides, 8 mm films, 35 mm films, 126 films, 110 films, and APS. The neat addition to the usual roster of convertible films and slides is APS, which stands for Advanced Photo System. It is a discontinued film type that was common near the end of the 90s. If your family used to take a lot of pictures around that era or you just want to be covered in this less frequent format as well it is a nice addition.

This section covers any physical aspects of the device that improve its quality and usage. 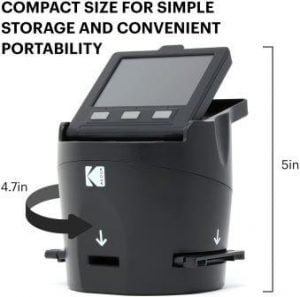 The first notable aspect of scanners is their screen size. Scanza comes with 3.5 inches LCD screen. It allows you to configure any image details such as color, brightness, or other aspects. Apart from the screen, other notable physical aspects are the three buttons at the top of the scanner and another three buttons on the display screen, covering operations scanner is capable of. The scanner itself is decently lightweight at 1.03 lbs and very compact with dimensions of 5.1 x 4.7 x 4.5 inches. This allows for simple storage and convenience when transporting it.

Wolverine’s entrant boasts a 4.3-inch display, allowing for more screen space and better visibility. The downside is that you cannot edit images directly on the scanner, requiring you to port them to a device with editing software. In terms of size, Wolverine Titan is 4 x 5.5 x 3.5 inches, maintaining the compact design and further keeping it with its 1 lbs weight. It possesses six buttons located at the top of the scanner. 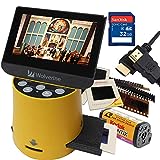 This model comes with 7 inserts, a USB cable, an adapter, and a cleaning brush.

Through the categories, we see various highlights of items in question. The simplicity of immediately storing the newly created picture onto an SD card while still maintaining the capability of viewing and casting said image to other devices is a cornerstone of these scanners. It comes in useful for anybody who doesn’t want to hassle themselves with cables and wants to keep their film scanning work short. Warranty that comes with items is always welcome as security of investment keeps that purchasing anxiety subdued. As for their strengths, we can see Wolverine Titan’s screen providing better clarity and insight into the currently scanned picture due to its size. However, on the flip side, Kodak Scanza’s marginally smaller screen doesn’t impose a big disadvantage between the two while its swivel display ability provides different angles for looking at recently scanned images, also base MP may be smaller but the enhanced version of images does instantly push this scanner into a more favorable position. What Kodak Scanza has as pure strength is editing capabilities which provide a lot more versatility as well as convenience to the item. The items included are also more plentiful on Scanza’s side. With those two prominent segments, Kodak Scanza manages to edge out as a winner of this comparison.