Toshiba P300 vs WD Blue: Which Hard Drives are Better? 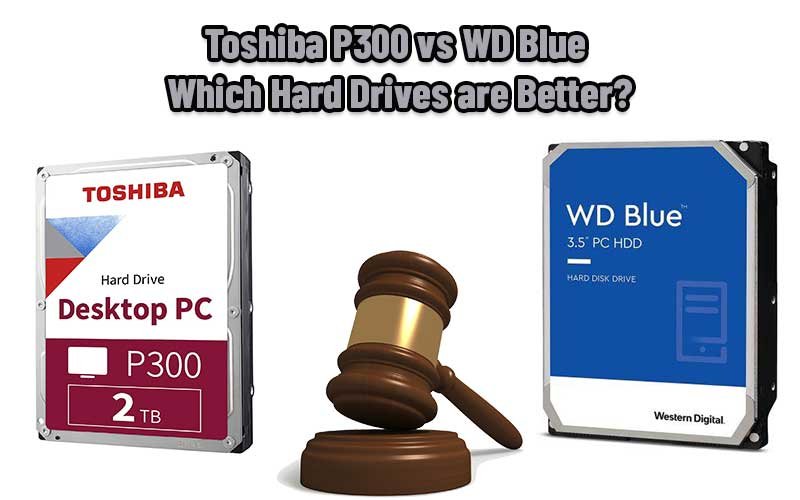 With so much data today, it’s normal for IT enthusiasts to need additional data storage on their computers. Installing an internal hard drive is a great way to give yourself extra storage and improve the performance of your computer.

Today, we are going to compare the Toshiba P300 vs WD Blue. We will look at all of the specifications of the 2TB but also list other buying options. You will be able to find a comparison chart and some pros and cons and to finish off our final verdict.

Before we start, please be aware that there are two versions of the WD Blue in all but the 3TB and the 4TB. With regards to the 2TB, there is the WD20EZAZ and the WD20EZRZ. We are looking at the WD20EZAZ.

Let’s begin by going over their shared features.

The Toshiba P300 and the WD Blue are perfect for professional use and non-professional use. They can boost PC performance for gaming and improve video and photo editing.

With a 3.5-inch form factor, the Toshiba P300 and the WD Blue are compatible with any device that has a spare 3.5-inch bay. They are SATA 6 Gb/s internal hard drives, both with Advanced Format (AF).

Because of the shock sensors, any bumps, and knocks are immediately detected, and the data being written is protected.

There is a 2-year limited warranty with both the Toshiba P300 and the WD Blue.

Some of the more important specifications are quite different, so we will discuss these next.

There are plenty of specifications to recap on. Remember that the comparison chart below is about the 2TB internal hard drives and specifically, the WD20EZAZ.

It’s probably one of the least important differences but we like to be thorough! 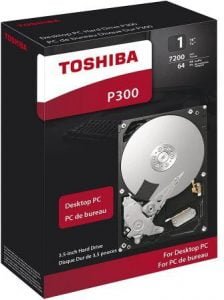 As we mentioned, we have taken a closer look at the 2TB internal hard drives. However, there are more options. 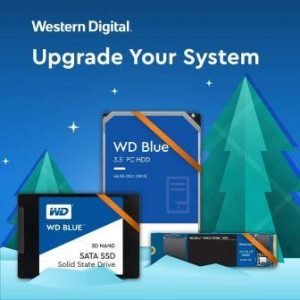 Read next – WD Green vs WD Blue: Which Hard Drives are Better?

From buffer to host, you can enjoy up to 6GB/s.

The cache size is important because it determines how much space you have for the temporary saving of files during the transfer process.

The cache is 64MB

Read next – Toshiba P300 vs WD Black: Which Internal Hard Drive is Better?

The revolutions per minute speak to the speed and performance of the hard drive, the higher the number, the better.

The Winer Is- The Toshiba P300 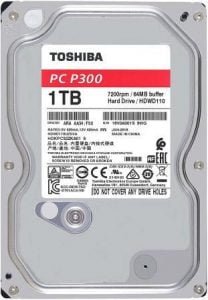 This number relates to how fast the spindle spins in order to prepare the hard drive. Again, the higher the number the better.

There is no product information on the load/unload cycle. 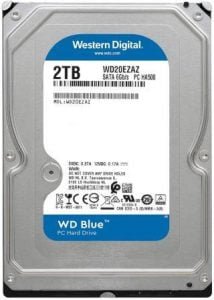 Just before our final verdict, we have added some pros and cons of the Toshiba P300 and the WD Blue.

The good news about the Toshiba P300 and the WD Blue is that they are both easy to install and only take minimal formatting for optimal use. We noticed a big difference in the performance of our PCs, but we have to say that in terms of speed, especially for gaming, the WD Blue was better. Despite having a slower RPM, the larger cache made a difference. It was also great to have such a huge range of buying options with the WD Blue.

Our final decision came down to two things, reliability and value for money. Unfortunately, the Toshiba P300 was not as reliable as you would expect from such a well-known brand. There were cases of the hard drive only lasting a few months or not at working at all. Even with the 2-year limited warranty, this is a hassle. On the other hand, the WD Blue was more reliable, it came with the same 2-year limited warranty but also the bonus of Acronis Image software and being slightly cheaper, making the WD Blue the overall winner.