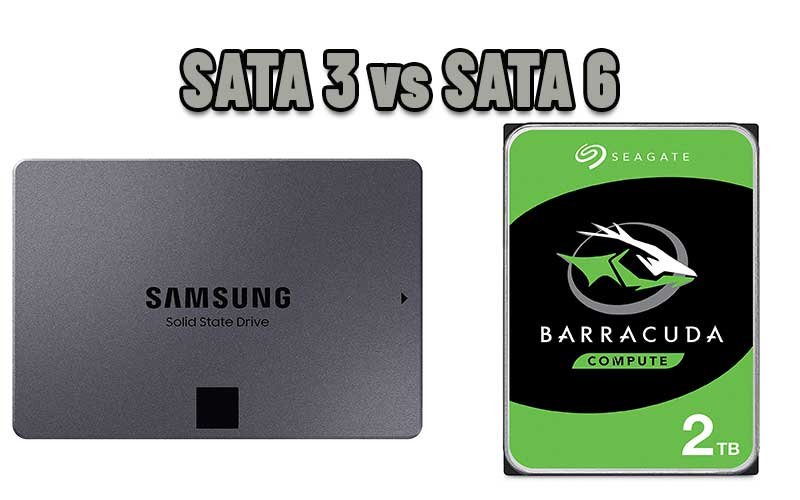 SATA drives have become a more frequent part of the computer industry. When it comes to data storage it is one of three kinds we see most often along with solid-state drives and hard disk drives. SATA drives are less expensive than SSD ones, although they do slightly suffer in terms of data retrieval and boot-up speed. SATA is usually named with Roman numerals, one such example would be SATA-III, but we often see terms such as SATA 3 and SATA 300 used. When written with Arabic numerals it designates SATA’s speed. The single-digit numbers refer to Gbit/s speeds while triple-digit ones refer to MB/s speeds. As technology advances new forms of SATA become available. These new forms are called revisions and provide more features as well as speed. Two of such that we will be looking at right now are SATA 3 vs SATA 6.

Differences Between SATA 3 vs SATA 6

The classification of this revision is SATA-II but the SATA 3 is a more frequent, less professional, name used for it. As we’ve discussed this provides information about the speed of the item. This revision is backward compatible with SATA 1.5, otherwise known as SATA I. The speed of SATA 3 possesses a native transfer rate of 3.0 Gbit/s which, when encoding is taken into account, equals to transfer rate of 2.4 Gbit/s. To set this storage device in motion you require connectors that plug straight into the motherboard. It also has Native Command Queueing, or NCQ for short, which is an extension of SATA protocol. Using this the device is allowed to optimize the order in which commands are executed, this is what makes them faster than usual HDDs.

The changes which come with going from SATA 3 to SATA 6, SATA III in terms of revisions, are firmly present.  The first one is an obvious jump to 6 Gbit/s of scalable performance, which provides 4.8 Gbit/s of uncoded transfer rate. The connector is small and utilizes LIF technology for more compact 1.8-inch storage devices. SATA 6 is also backward compatible with SATA 3 and SATA 1.5, otherwise known as SATA II and SATA I. Another change is that Native Command Queueing streaming is now isochronous, which improves the minimum interval when state changes are recognized and acted upon. It also has an NCQ management feature that helps optimize performance. It also optimizes the use of the power you provide it due to its new and improved power manager.

When all is said and done SATA 6 is an overall more fruitful source of storage. Powerful speed, more features, and convenient quality of life changes make it an overall better pick. SATA 3 does offer all the good things one should expect from SATA, such as backward compatibility and good features which increase the efficiency of your storage, but sadly gets completely outmatched by 6’s additions. Do keep in mind that you want to maintain compatibility with your motherboard, which is usually easy due to backward compatibility, otherwise you may end with a lot of disks that you cannot use.