MR11 vs MR16 Light Bulbs: What is the Difference? 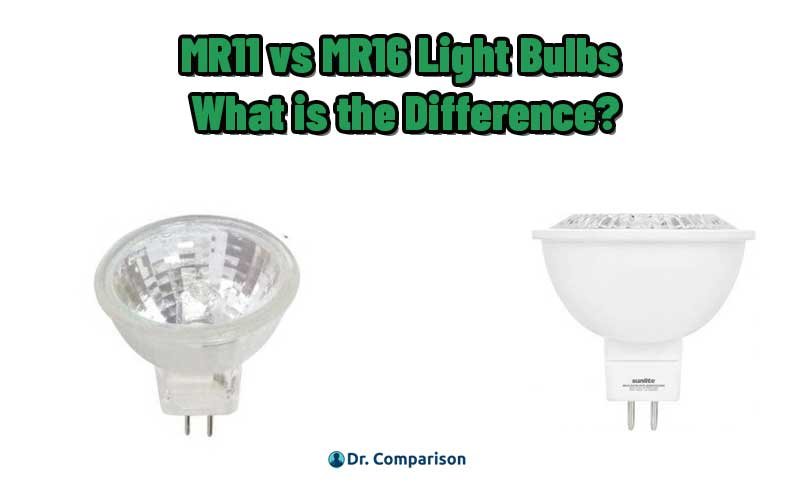 You aren’t the only person who has bought a light bulb and it either hasn’t fit or the lighting hasn’t been correct. The letters and numbers are enough to confuse most of us. Choosing LED is the smart way to go, but that doesn’t really narrow your options down that much.

Today, we will look at the difference between the MR11 and the MR16 light bulbs. We will cover their uses, brightness, and energy consumption. We will start by looking at some of the average specifications for the two light bulbs. Remember that different brands will have different ratings, so this is a guide.

MR11 vs MR16 Light Bulbs – Side by Side Comparison

The MR stands for a multifaceted reflector. They are commonly used in homes and the workplace, but they can also be used in devices like projectors. The number refers to the size. The MR11 is approximately 1.4 inches in diameter and the MR16 has a 1.9-inch diameter.

MR11s and MR16s on the Market Today

For a closer look at the differences between the MR11 and the MR16, we looked at the brand Simba Lighting.

The use is the same, the only difference is that they have a GU10 base. The bulbs are 5W (a 50W incandescent replacement) and have 400lm. You can choose the 2700k or 5000k in a pack of 6. The lifespan is also the same, but the bulbs are a little cheaper. You also have the advantage of the CRI 80+ rating, making colors much more vivid.

Read next – Par16 vs MR16 Light Bulbs: What is the Difference?

When it comes to the MR11 and the MR16, the first question will be the base and the fittings you have. After that, we would recommend the MR16. They are a little brighter, the quality of colors will be better, and they still only cost around $0.6 a year.