Blueair 403 vs Blueair 503: Which Air Purifiers are Better? 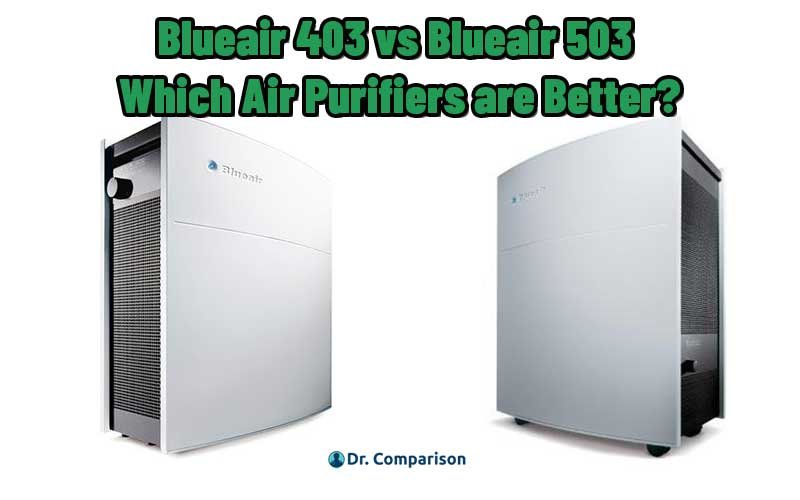 The summer months are horrendous for those with allergies and the winter months are full of viruses. The air in our homes can also become smoky, smelly and unhealthily stale. Ventilation is important but it won’t necessarily clean the air.

The Blueair Classic range is the winner of the Excellent Swedish Design Award as well as being some of the most effective on the market. We are going to compare the Blueair 403 vs 503. We will cover all of their specifications such as appearance, clean air delivery and technology. There will be a comparison chart for a quick recap, and we will include some pros and cons of each before deciding on the better buy.

There are a couple of similarities between the Blueair 403 and the Blueair 503, we will start here.

The comparison chart below shows all of the features side by side.

The Blueair Classic range is made from galvanized Swedish steel housing. The Blueair 403 and the Blueair 503 both have a blue power light.

The Blueair 403 and the Blueair 503 come with a magnet that attaches to the air purifiers and lets you know when the filters need replacing.

Read next – Dyson TP02 vs TP04: Which Air Purifiers are Better?

Differenes Between Blueair 403 and Blueair 503

To look at, they are practically identical except for their size. The controls are at the back, making them look sleek.

The Winner Is- The Blueair 403

Read next – IQAir HealthPro Plus vs GC MultiGas: Which Air Purifiers are Better?

While the other features might be related to personal preference, the capabilities and room size does impact the effectiveness of the air purifiers.

You can use this air purifier in rooms and spaces of up to 365 square feet. It will clean the air 5 times in one hour.

It will also clean the air 5 times in one hour, but you can use it in larger spaces of up to 580 square feet.

The two air purifiers from Blueair have been tested by the Association of Home Appliance Manufacturers for Clean Air Delivery Rate.

While there is no automatic mode, you can still change the speed of the airflow with both air purifiers.

There are three speeds with a dial knob on the back of the unit.

The dial knob is on the side and there are 4 speeds to choose from.

Read next – Blueair 121 vs Blueair 211: Which Air Purifiers are Better?

For air purifiers, they are both incredibly quiet and there isn’t a great deal of difference, most likely it’s a difference in the product description.

On the lowest setting, this air purifier runs at 32dB.

The noise rating ranges from 32 to 66dB, 60dB is the sound of normal conversation.

While the filters are the same, they have a different number.

There is one filter that can be replaced by opening the front door.

There are three preinstalled filters. You can change them by removing the lid.

As they are energy-efficient, you don’t need to worry about the cost of running them.

The lowest setting uses about 20W and the highest 75W.

The energy consumption ranges from 35W to 120W.

The Winner Is- The Blueair 403

Blueair is very specific about the warranties. Not replacing the filters every 6 months and using non-Blueair filters makes the warranty invalid. Also, be sure to register the air purifier to get the full length.

There is an impressive 10-year limited warranty included.

The limited warranty is for 5 years.

Once you take the room size out of the equation, we felt that the Blueair 503 was the better buy. It’s about $50-%60 more expensive but it was worth it. You have the extra airflow speed, a higher clean air delivery rate, and more filters. The Blueair 403 is just as effective, but the Blueair 503 was that little bit more superior.